With the attic restoration done, I went three levels down to the basement. I know it probably doesn't make sense, but the basement also looked like it didn't need a lot of repair, and I was eager to have as many rooms as possible finished. Actually, there is some logic in getting kitchens done before anything else.

There are two kitchens in Womble Hall, as in any mansion with self-respect: best kitchen and working kitchen. Best kitchen is just for show; it is never used to cooking. It displays fine copper utensils and other implements that are never used. Best kitchen at Womble Hall is full of objects, a mixture of handmade and bought, and I keep adding to it.

The scope of damage was tolerable, mostly mouldings.

But of course the cutlery in the cupboard got muddled. 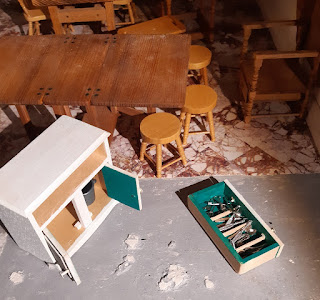 I am very particular about proper order of cutlery in my 1:1 kitchen so I spent some time sorting minicutlery with tweezers.

Then I put in most of the furniture and utensils. The greatest challenge was the shelf next to the stove. Everything else I could fill with pots and pans before inserting into the room, but for this shelf I had to reach into the room. A good deal of patience, and the show kitchen is done. 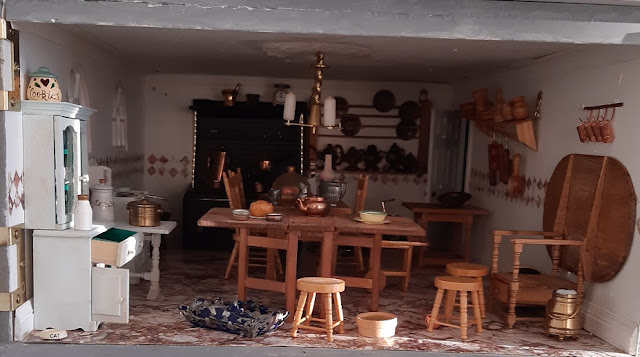 The working kitchen was miraculously almost fine, except for a broken window and a few tiles missing from the floor. 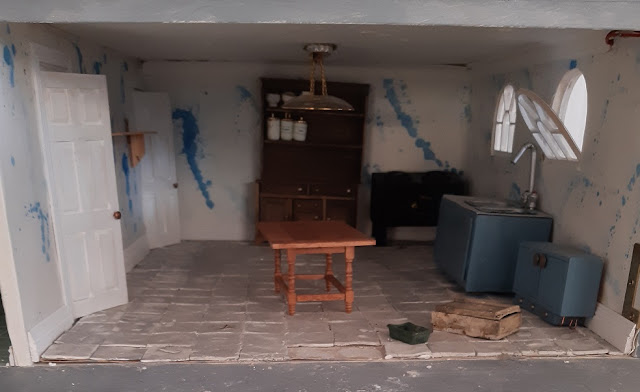 The window was easy just to press in gently. I found the tiles in the far corner and glued them back. I made this floor many years ago from air-drying clay. Today I would have done it from egg cartons, which would have been easier and neater. I think I will replace it some time, but not now. It looks fine.

The stove was slightly broken. 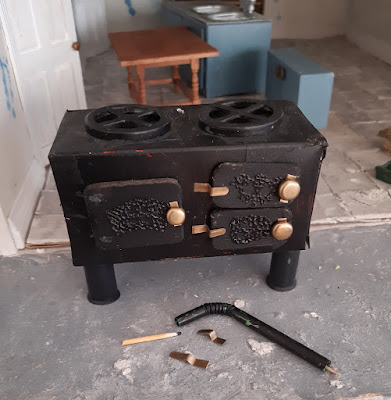 It is handmade and easy to mend. And putting it back was also a good moment to see the room before it was filled with stuff. 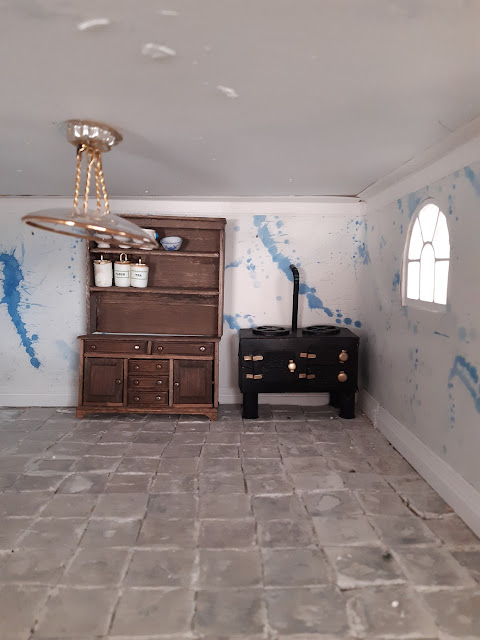 When I opened the box marked "Kitchen, small things", I realised that it contained a mix of objects from all basement rooms, therefore it would make sense to deal with them at this point. The pantry looked fine, just a few broken shelf legs. And the mouldings had got unstuck. 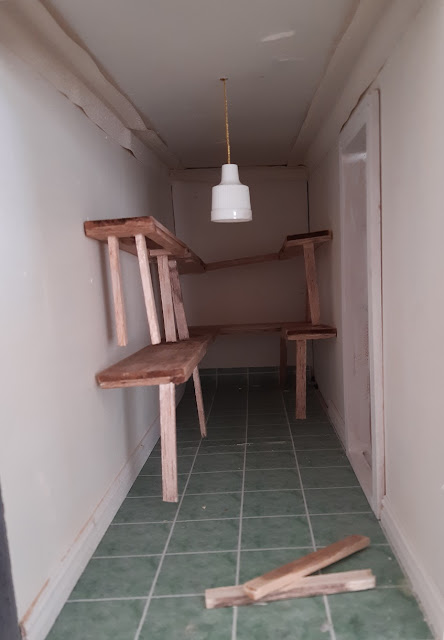 It is very difficult to work in the pantry because it is so narrow. When I put in my hand, I cannot see what I am doing. When I first built it, I used tweezers to put stuff on the shelves. I like moving things around so I don't glue them. I considered taking out the shelves to mend, but it felt too complicated. I just glued on the missing bits. 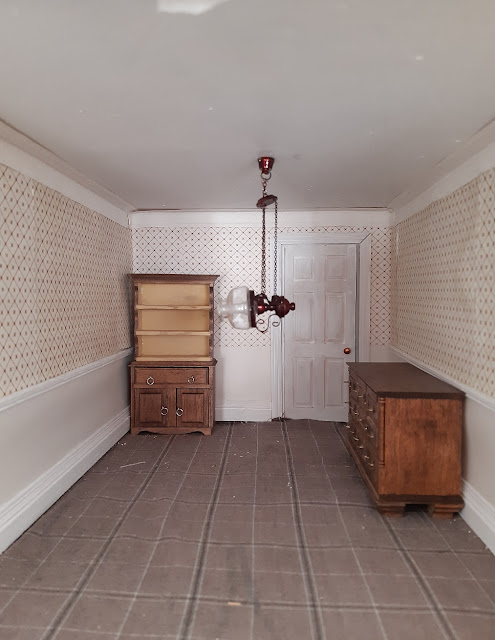 One chain on the ceiling light has gone off, but I cannot do much about it now because it is attached from the floor above so I will deal with it when I move on to that room. I cannot fix it as it is, again because the room is too narrow.

The door into the rear corridor was jammed, and when I managed to open it, I discovered that the back stairs were broken. 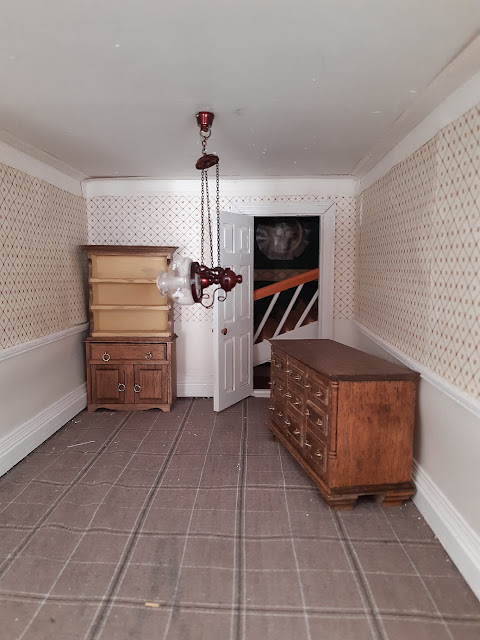 This will be very difficult, not to say impossible to mend, because the rear corridor is sealed off, and I cannot access it without dismantling the whole basement. Of course I can just close the door, but it would be a shame because it is such an interesting feature. The corridor is also visible from side windows. I have no idea how to go about it.


Meanwhile, I took everything out of the box marked "Kitchen, small things", contemplating the sheer scope of objects I have in the basement alone. 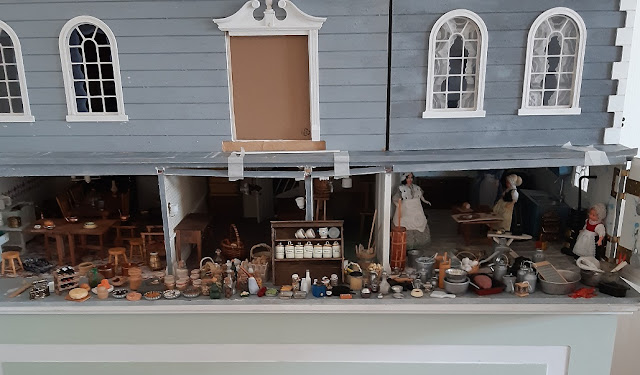 Most of these I made from rubbish or upcycled. Here are some close-ups. 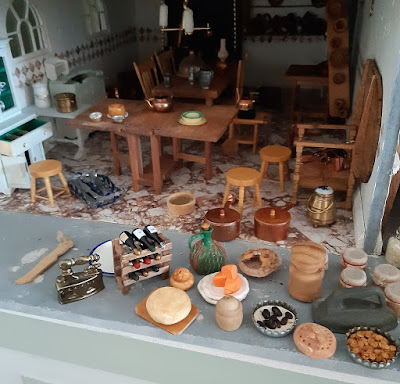 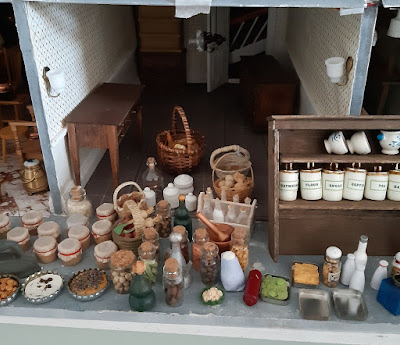 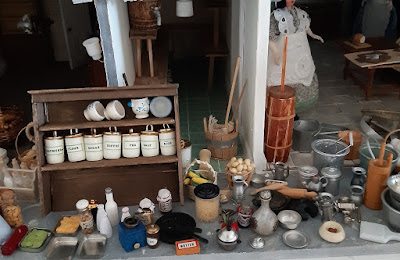 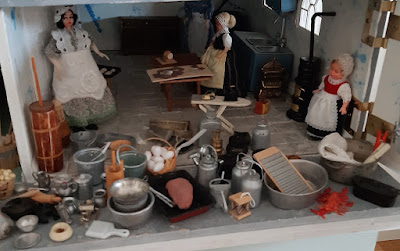 I was so overwhelmed by this sight that I sat still for a while, staring at it, not knowing where to start. If I hadn't had two destructive felines sharing my living space I would have left it until tomorrow, but my options were either find a place for every object or pack them all again. Guess what I chose! And it wasn't that bad at all, just as in full-scale (which I went through recently). Once you put every item where it belongs, it doesn't look crowded or messy.

Here is the working kitchen, just like it was before. The cook and the kitchen maids are happy. 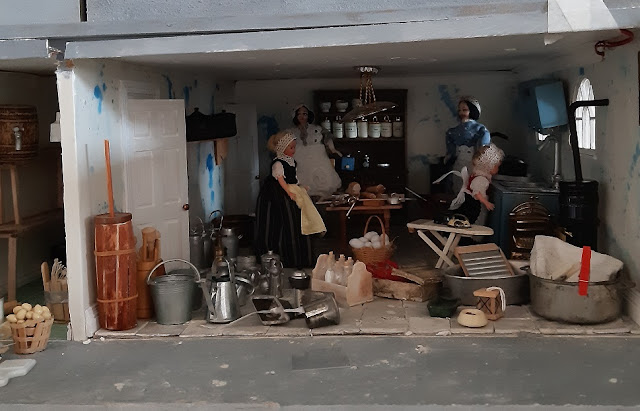 There are a couple of details missing that I will hopefully find in another box of "Small things": two antique tin shelves where all the pewter stuff will go (which is a mix of expensive antique and painted plastic), as well as a set of servant bells. There may be other items scattered in various boxes.

Here is the pantry, full of goods. 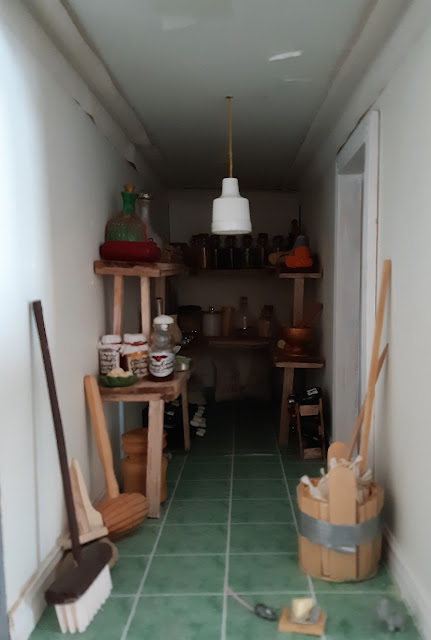 I have considered gluing everything on with glue dots, but will wait a bit. I have recently attended a course in making miniature breads, so I may want to replace bread, cheese and pies that I made fifteen years ago. It is amazing how our standards rise. Fifteen years ago I was proud of my breads.

Finally, the entrance. As I said, the lamp will be mended later. 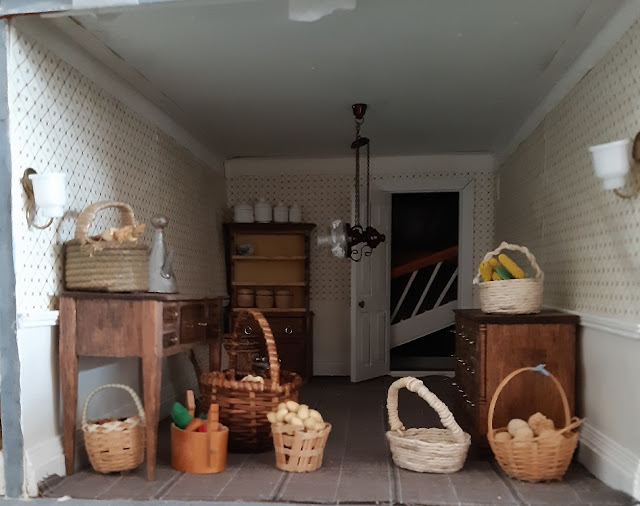 This lower entrance is used for deliveries, this is why there are so many food baskets. I still feel upset about the broken stairs, but now much I can do right now.

And not to forget the fronts. 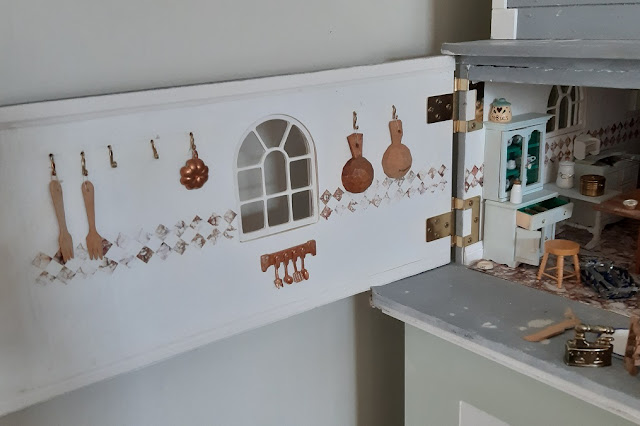 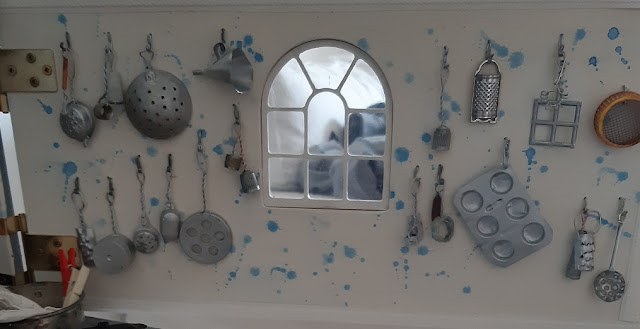 I could never understand why people might NOT want to decorate the fronts. There is so much interesting space to be added. In this case, all the utensils to be proudly displayed.

Anyway, now the whole basement is in relatively acceptable shape. Relatively, because there is some work on the exterior to be done, and the wiring has either to be mended or removed and replaced. But I feel I have made clear progress. 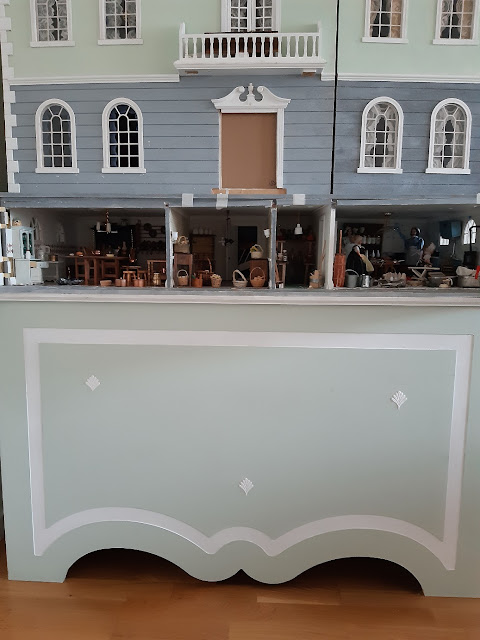 Posted by Maria Nikolajeva at 16:58