During a raid on a craft shop I came across this set of garden furniture. 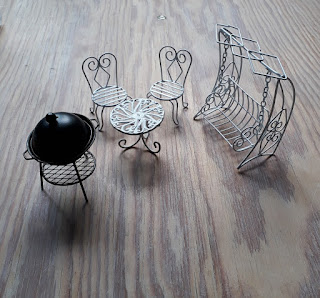 It isn't particularly elegant, but it wasn't expensive, and I thought I could make something interesting with it. I have never made an outdoor scene, and the grill just begged to build an environment around it.

The first step was to decide on the size of the scene, and because it is an outdoor scene, I didn't use a box, just a piece of cardboard. I may add a backdrop, but I am not quite sure yet. Flagstone deck felt right for a barbecue, and it is fun to make from egg cartons. 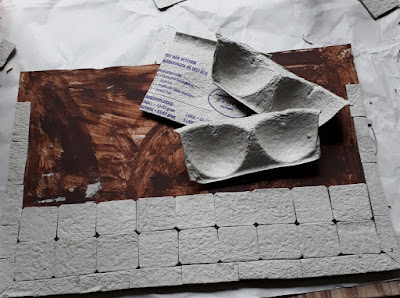 You need a lot though, as I remember from my Roman turret project, and in a household of one, it may take some time. So I made as much as my current egg supply allowed and moved on to making a fence. I could have made a stone wall, but it would obscure the scene, and I wanted something that would emphasise the scene without disturbing it. A conventional wooden fence felt appropriate. 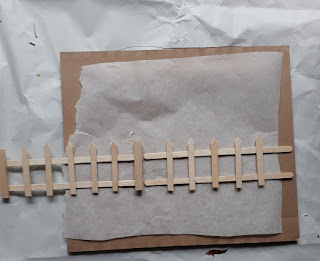 At the moment, most of my tools and supplies are in storage, waiting until I get a place of my own; moreover, what I have brought with me turned out to be quite random: for instance, I don't have my cutting mat and have to do with a piece of cardboard. Which works perfectly well.

I like putting furniture even in unfinished environment because it helps with planning the whole project. 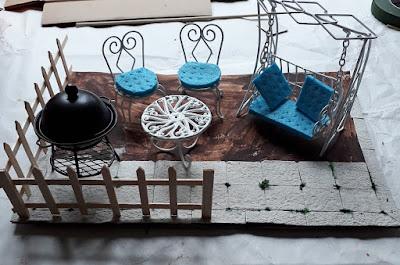 I cut the cushions from a kitchen sponge cloth. I also decided that the owner of the patio is a bit lazy and hasn't weeded between the stones, and everyone who has ever had a stone patio or yard knows how stubborn weeds are.

Yes, I know that you can buy miniature grass in model railway shops, but what's the challenge? Much more interesting to make your own by unraveling a piece of fabric. Once again, my supplies are random, but I will save the dark threads as they can come handy in another project. 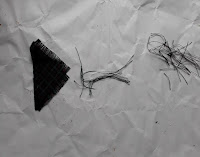 This is a later stage (when I had consumed more eggs), but it shows what I did. Bits of embroidery thread, bits of florist tape, and a few fabric leaves cut to measure. 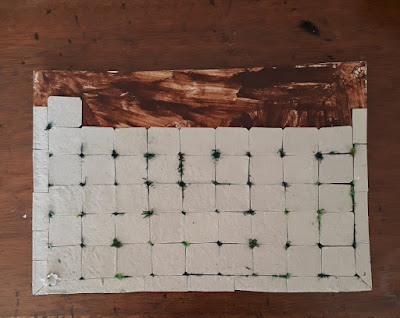 I found a very interesting gate structure on Pinterest, which didn't work in small scale, but at least I made something less usual. And then, on my walk in one of the wonderful corners of my city, I saw just what I needed:

I have never seen a gate lock like this. My walking companion was puzzled about me being so excited and taking pictures of something so ordinary. But it isn't all that ordinary, is it? It's very clever, and it was fun to try and reproduce it in miniature. 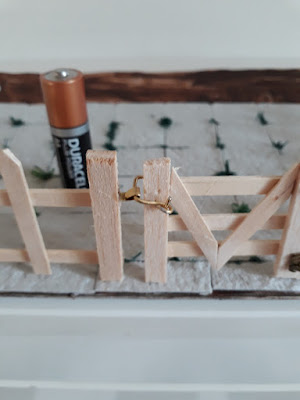 The battery is for scale.

I was so eager to build the fence that I abandoned my principle to paint before assembly. It will of course be much more difficult to paint, but on the other hand I needed to see what it would look like before I can decide what paint to choose. I am considering the rusty red as in the picture of the full-scale gate, but I am anxious that it would be too conspicuous. If you want to know what I have decided you will have to come back. 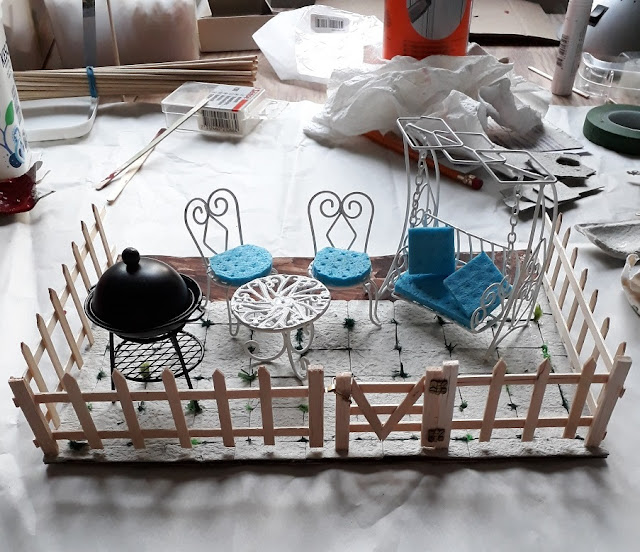 In this picture you also see a bit of my workspace.

I have moved again. (If you wonder why I keep moving and downsizing, it's a sad story, and you don't want to know the details, but it wasn't by choice). I am now renting a furnished flat, which means that I have to adapt to the available furniture and arrange my workspace to the best of my abilities. It also means that still more of my stuff had to go to storage, and I only brought one box of supplies. I packed in haste, and it's funny to discover how randomly I chose what to bring and what to store. I have the most essential tools, but my cutting mat is elsewhere. I have paint, glue, fabric, paper - enough to do some projects. And I have a hobby shop close by.

When you live in somebody else's space it takes time before you can, first mentally, then physically, re-arrange it to your liking and your needs. Obviously, a folding table makes a perfect workbench, and if I ever have guests who require a coffee table, I can quickly put everything away. But the best thing about this place is that I don't have to clear it away every night. 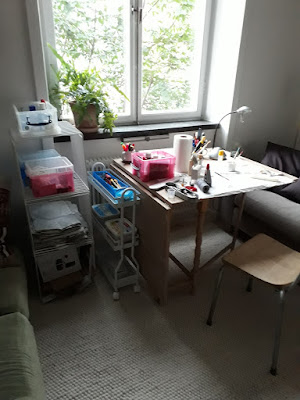 My landlady has kindly given me one and a half book shelf, in a corner closest to the floor, but as I haven't brought any of my books - you see where my priorities are! - most of my Really Useful Boxes can just about be squeezed in. And I start by going through them to see what I actually have brought. 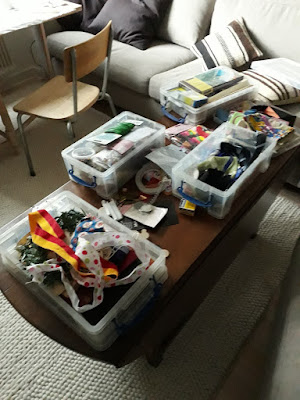 Maybe this is the time when I will choose projects based on supplies. All those saved posts from Facebook, when I thought: Yes, I can make it some time. Now is the time.

I have brought a small selection of kits that will keep me busy for a while.

And I have also brought a few pieces that I bought at a car boot sale just before I moved. 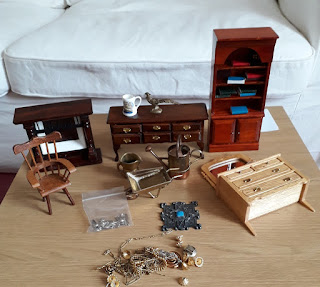 The broken dressing table begged for my attention. Apologies for poor picture quality - I haven't yet adjusted to the light in this place. 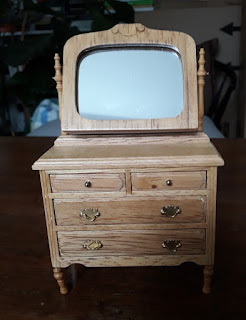 It is one of those pieces that are sort of ok, but crude, and the finish is dull. To do it properly you need to remove the varnish, for which I have neither space nor equipment, so I just sanded it and then painted. I haven't taken step-by-step pictures because it was quite straightforward. I painted with brown paint first and then antique white, with golden details. I distressed it a bit. 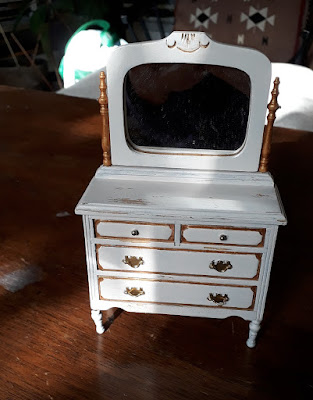 The only problem was painting around the drawer pulls. They seem to be glued on rather than attached with nails so I didn't risk removing them.

I also lined the drawers with Japanese paper. 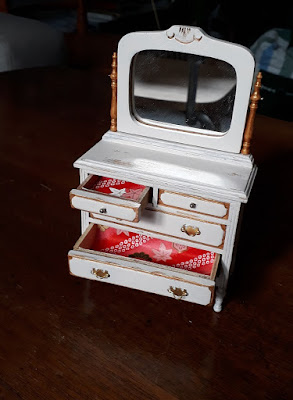 This piece wouldn't win a prize at a miniature fair, but it was fun to upcycle a boring piece into something more exciting, and it was a good way of getting back into the making mode.

In a kitchen drawer I found some string - an opportunity too good to miss. 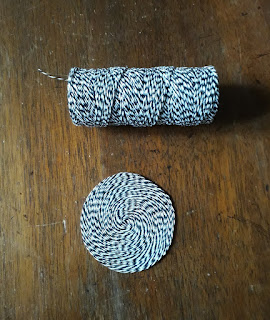 I am thoroughly thrilled with my first day back miniature making. I wasn't aware that I had missed it so much these past weeks. I am looking forward to many great projects even before I eventually get a place of my own with a HUGE hobby room.

Posted by Maria Nikolajeva at 19:20 2 comments: