I haven't posted anything for a long time, but not because I haven't done anything new. It just didn't happen. Catching up now, I will start with a project that I did in early autumn, when it was still possible to move around, and I did it in my miniature club. In this club, that meets once a week, everyone makes what they want; single objects or a larger project or anything. We have a guru who has an answer to every inquiry and a solution to every problem. We also support and encourage each other.

When we got together after summer I decided to make a room box, and I wanted to make a ceramic studio to give my daughter for her birthday - she is a ceramic artist. There are some rather specific elements necessary in a ceramic studio, and it was a challenge I so much enjoy. I browsed through many pictures of studios on the web, also recalling the time, long ago, when I attended pottery classes. A pottery wheel was the obvious start, and that's what I made first. 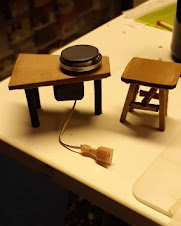 I wasn't sure how to organise the room box, but the guru happened to have a wine box she didn't want - wine boxes are otherwise hard to come by these days. I painted the walls and ceiling white and made tile floor from egg cartons. A studio would of course have shelves, and rummaging through supplies I found a lampshade, exactly the same I once used, inspired by the very same guru, in my first dollhouse. I trimmed it to measure and inserted into the box. 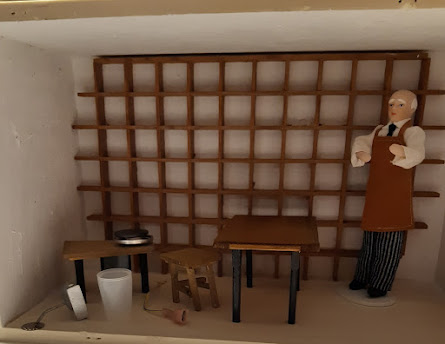 The doll is for size only. Since I was making everything from scratch, scale was essential. A table has to be higher than the wheel.

Of course I needed a kiln, and there are two types of potter's kilns: front-opening and top-opening. My daugher has the latter, but for a room box a front-opening kiln is much more grateful because you can display pots when the front is open. I tried all kinds of boxes available in the workshop, but then remembered a tin box that I many years ago used as a refrigerator. I am glad I didn't throw it away because it was perfect for my purpose here. I painted it on the inside and put in wire shelves. Obviously a kiln cannot stand on the floor so I made a base. I also added some tiny watch parts for knobs.

The guru gave me a small sink left over from some other project, and I added taps, splash board and sewage. I was now in the third or fourth week of the project and started finding small items to serve as various jars and containers. I also made two ceiling lamps. 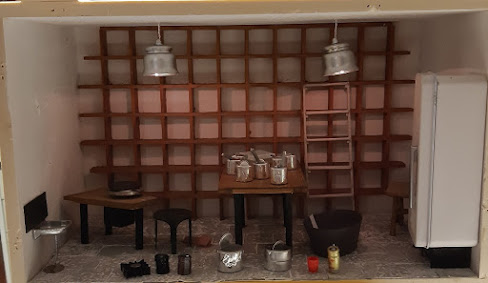 But of course ceiling lamps would not work for a potter: you need strong, focused light right over the wheel. I looked around in the workshop. Making a proper workbench lamp would be a challenge. I like challenges. It took several attempts and many dirty words, but I did it. I also wanted an iconic Swedish wall shelf, and I had actually made one some months before, without any project in mind, but it went well scale-wise. 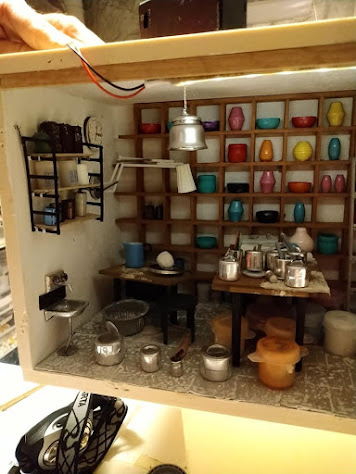 This picture is from a later stage of the project when shelves were filled, but before that there were some other things to make. Paint and glaze jars, for instance. 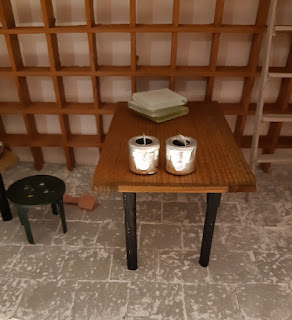 I needed lots of finished and unfinished pots. I needed tools. And I needed chaos. Even the tidiest potter cannot keep the studio tidy.

Here is the completed project. I always say that a miniature project is never completed, as you can always add and improve, but in this case it had to be completed by my daughter's birthday, and I wouldn't be able to change anything once it was gone. 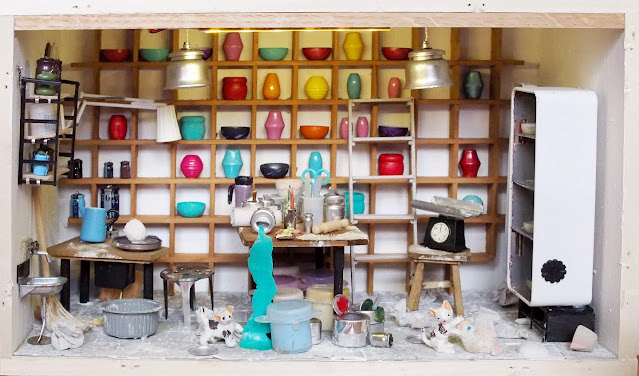 So let's have a closer look at different angles. 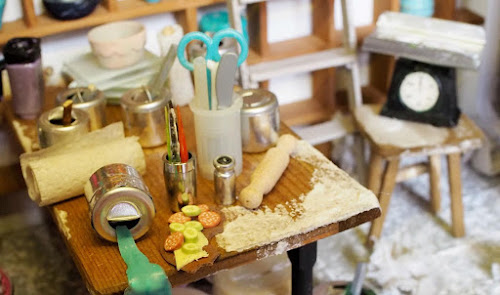 On the table there are various tools, jars - one is spilling paint, which is fun to make - kitchen towel, coffee mug, a half-eaten sandwich; the table is smeared with dried clay. On the stool, you see scales, which is a Barbie item painted in more appropriate colours. 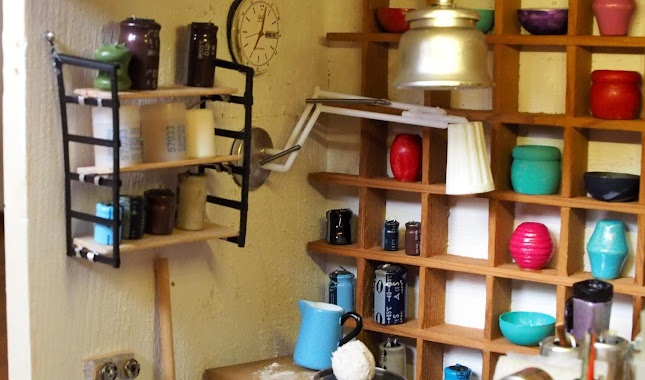 The corner with the lamp and the shelf. Paint jars are mostly radio or computer parts. The ceramic items are beads, candle holders, buttons. The lump of clay on the wheel is... clay. 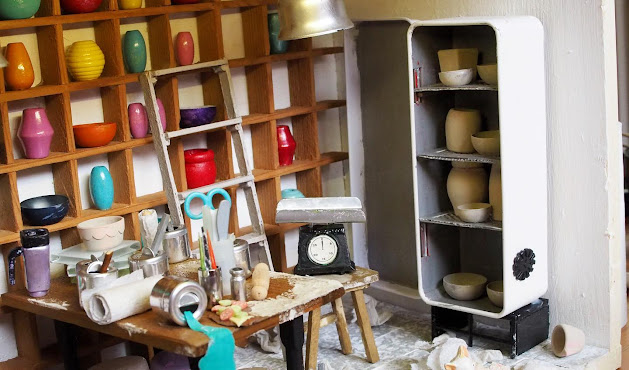 My pride - the kiln. I used the same kinds of beads and other vessels and painted them with chalk paint to resemble unglazed ceramics. And the fact that the kiln can be opened to display its content is a bonus.

There was an issue of getting the room box to my daughter during the pandemic, but we managed it, and I think she was glad. She did point out, as I had anticipated, that she would never allow cats in the studio, but I told her it was poetic licence.

As with all giveaway projects, I felt separation anxiety for a while. But I was and still am pleased with it because I managed to make it just as I had imagined.

This was two months ago, and I have done lots of other stuff since then so come back soon.

Posted by Maria Nikolajeva at 16:53