Mending the roof is a huge project, and I have realised that it was a piece of good luck that it had come off because it is much easier to do the necessary repairs on a table rather than reach over balancing on a ladder.

The roof is covered with slates that I made from card. I am full of admiration for people who make individual slates or tiles from clay, but I think my method works fine.

Some of the slates appeared to be missing.

But on closer inspection they have just shifted. 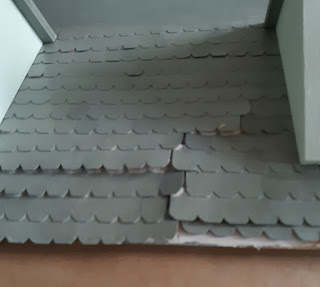 Not a single one was missing, all because they are strips rather than individual slates. So it was just a matter of gluing them back. 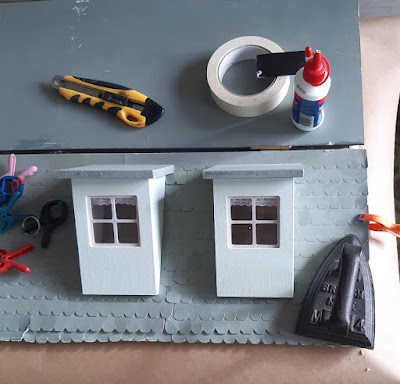 By the way, I have found a perfect tool for the kind of repairs I am dealing with. 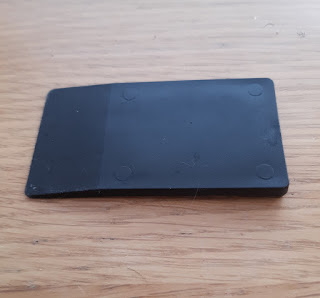 I think it came with my cellphone, to attach protective film to the screen. It has proved handy for spreading glue under unstuck paper or card.

As I was looking at the roof contemplating possible improvements it suddenly struck me that I should have made scores between slates. Isn't it the most obvious thing? How come I had never noticed it before? So I went all over the roof with my bone folder and metal ruler. Yes, it took me an hour, but look at the before and after and see whether you think it was worth the effort. 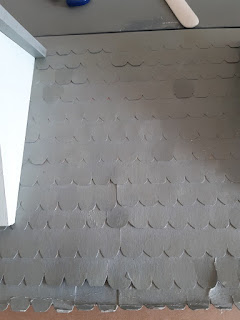 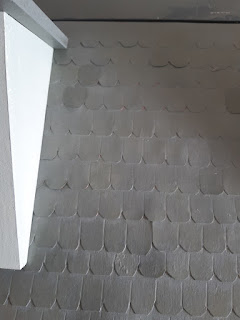 I have already spent 2000 hours on this house (yes, I do keep a log) so another hour is not a big deal.

At some point I may rust a few slates here and there. And maybe let some moss grow in between. But it is another project.

Now that I was finished and happy with the outside it was time to turn the roof over and inspect the inside, that is, the attic ceiling. 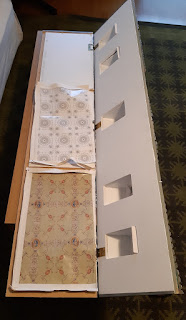 All three attic rooms have Adam paper ceilings, which were badly damaged. I considered removing the paper altogether and leave the ceilings bare, but it would be a shame. As you see, two window sills are missing in the dormers. The sills were not part of the original design, but I added them to be able to put flowers and ornaments and even lights in the dormers. I never got that far so now is a good moment. Of course, these will need to be permanently attached so that the roof can be opened without the objects falling out.

Actually, one dormer had come off, so this was the first thing I had to mend. 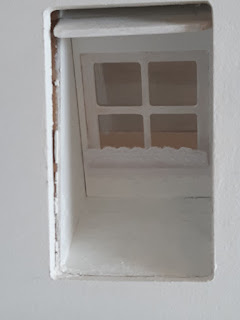 I now see that apparently I used double-sided tape when I attached the ceiling paper, which was probably the wisest thing to do then, as I was working inside the rooms. Now I can do it easier.

Remembering the pain of gluing on the roof, I scratched and sanded the grooves. Then I glued back the paper.

As I mentioned, two window sills were missing, and I found one, while the other was definitely lost, so I made a new one. I wanted the sills to put some objects on them that would be visible from the outside. They need to be firmly attached, upside down. 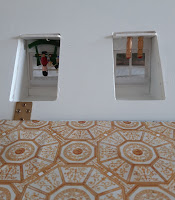 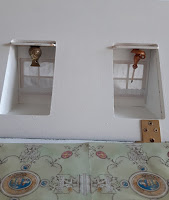 So when the roof is on and closed, you can see objects through the windows. 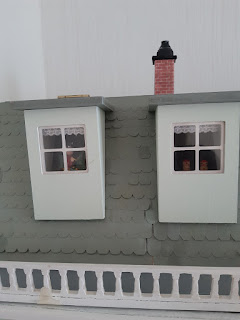 Unfortunately, I cannot glue on the roof yet because I need to do some work on the back, and I cannot move the house on my own. Since I am self-isolating*, like all responsible citizens, it may be weeks before I can get help. But it doesn't matter. The house looks really nice now. Nobody would guess it had been broken. 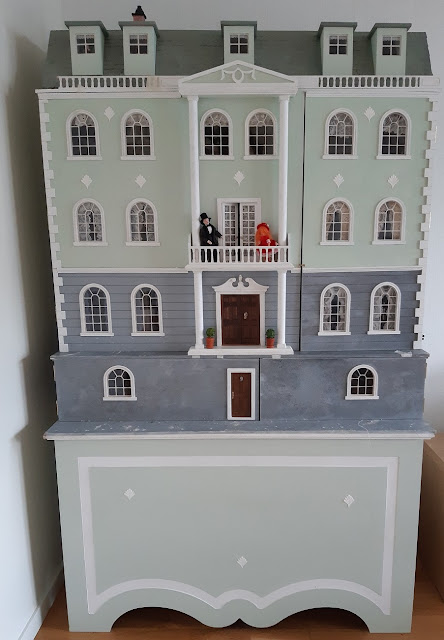 I will now move inside again. Come back soon.

Posted by Maria Nikolajeva at 16:51