From coffee pods to flower pots

Some time ago I visited a friend who used coffee pods to make coffee. I have heard about them, and I have heard that miniature-makers find them useful, but I had never seen one. My friend was utterly perplexed when I asked whether I could collect the used ones. I wasn't sure exactly what I could make from them, because they are different from milk containers, slightly convex. 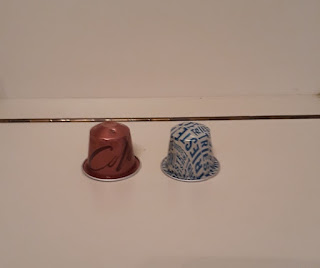 But I was sure that I would think of something, and I was also eager to show my friend what a valuable contribution to my miniature-making she had made. So this past weekend I started exploring the potential of used coffee pods.

My first thought was buckets, like I make from milk containers. The bottom can be easily bent inwards, and it doesn't matter that there is a hole. However, they have large brims that don't look natural for a bucket. Flower pots was the next option, and although they are twice the size of a 1:12 flower pot, I thought they could be planters or larger tubs.I wanted them to look like terracotta, but I am not very good at mixing paint. I should have added more red. Still, I was quite pleased.

While I was at it, I also painted a nasal spray bottle cap that had been waiting for this transformation for a long time. It is more like a flower pot in size and in shape.

Then of course I had to make plants. First of all, I made a simple fern, using florist wire and tape and painting the leaves with a lighter shade of green for effect. Then I constructed a weird plant from plastic Christmas decorations, but as I was passing the kitchen to clean my brushes, I suddenly saw that I had a plant with exactly that shape of leaves. (It is not my plant, so I am not on friendly terms with it). It also needed some painting, and the result was, if I may say so myself, stunning. I don't know the name of this plant so maybe someone can tell me. After that, I made the third plant by cutting up a 1:1 plastic twig.

For the smaller pot, I made a geranium. I will not describe the process because I have done it before, but I can confirm that it took about six hours and that the twelve stems contain 240 individual petals curled while wet one by one. Since I don't have my punches at the moment, I cut the leaves from florist tape and painted a bit here and there for variety.

So here is the result of my weekend: 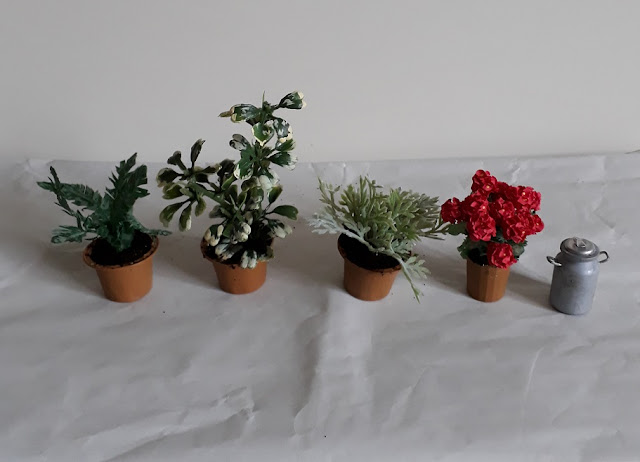 Last in the picture is another milk canister I made from an eye-drop bottle.

This was a hugely productive weekend, don't you think?