Every now and then I go back to my old projects and either dismantle them or improve them in some way. I have for instance made room boxes with shops, and I keep adding objects or things get "sold" for other projects.

It is almost impossible to alter something in a project that you have gifted. For some time, I kept giving my friend new items for her shoe shop, but there is a limit to how much you can squeeze in a shoe box. Mostly, when a room box leaves your hands it's out of your control. I even wonder how many of them have been kept. I shouldn't care, but I do.

I have for a while wanted to improve the room box I made for my son many, many years ago. It was the second room box I made, and I wasn't very good at it. Every time I came to visit, I would look at the box and wish I could give it another chance, and finally the time has come: I am working on the revision of Lord Asriel's study.

This is the before picture, more or less the final picture of the original project. 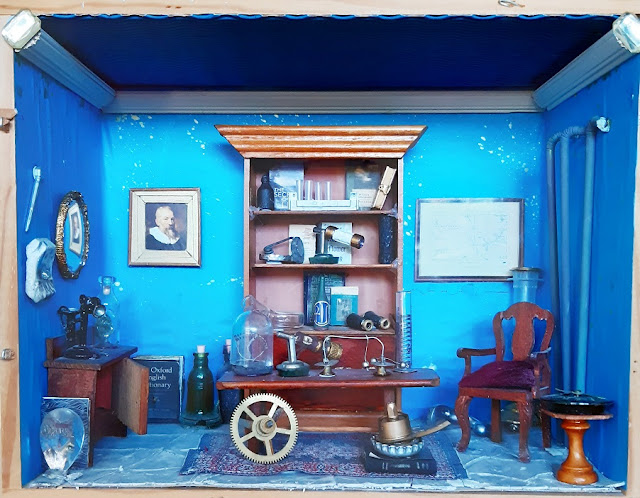 I will not elaborate on every fault I find, but it needs a total renovation, including floors, walls, mouldings and more. The challenge, however, will be to preserve the general look so that it will still be easily recognisable. The focal point of the room is the bookshelf, which is one of those pathetic first attempts at handmade furniture, so I will replace it with a magnificent Chippendale bookcase. And the rest will have to match.

I have just had good training for this project making my Dark Academia book nook. I don't want to copy it, but I will use some features, because Lord Asriel's study is a typical Dark Academia environment. I didn't know anything about Dark Academia when I made the box all those years ago.

The first thing I did was of course strip the room of everything, except the wallpaper and the ceiling that I decided to keep, for the reason stated above: it must be recognisable. I left the pictures just to have some sense of what it used to be. 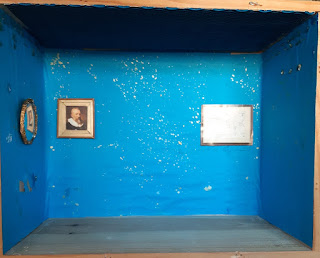 The old floor was flagstone made from air-drying clay. At the time, it was an innovative technology for me, and I was proud of it, but really, why would an Oxford academic have flagstone floor in his study? It's more appropriate for a wine cellar. Hence, the first step was to make a proper hardwood parquet. I had a large piece left over from an earlier project (in fact, I cut a little bit out of it for Dark Academia) so I used it, or what could be saved of it, since a lot had to be redone to fit the new floor area. I was much more diligent with sanding the floor when it was finished. 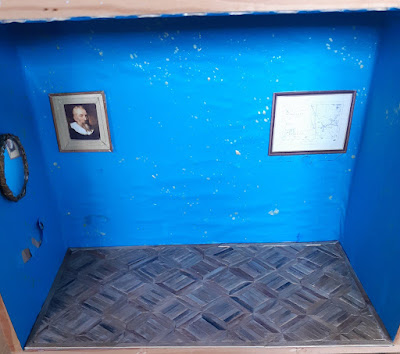 Next, I wanted to make dark wooden panels, and for that I have experience both from Womble Hall and Dark Academia. I used a strip of card, adding some moulding from coffee stirrers and skewers. I considered heavy skirting I have left over from Womble Hall, but it felt too bulky. 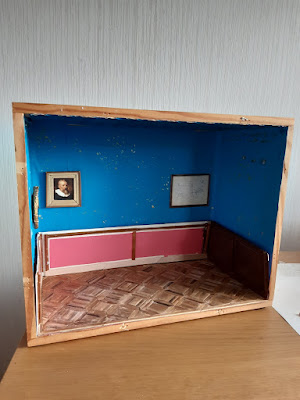 But I wanted something extraordinary for the panels, also testing something I have never done before. I had a wooden ornament from a hobby shop, and it would have been easy to just get more of them, but it's not much of a challenge. Instead, I made a mould from air-dry clay, then made multiple imprints of the ornament. 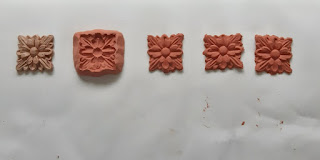 I painted the panels with acrylic, then gave it a coat of mahogany stain and several coats of varnish.

Close up. Yes, I see that the wallpaper is bubbly, but not much I can do about it, short of pulling it off and hanging new, and that's too much. 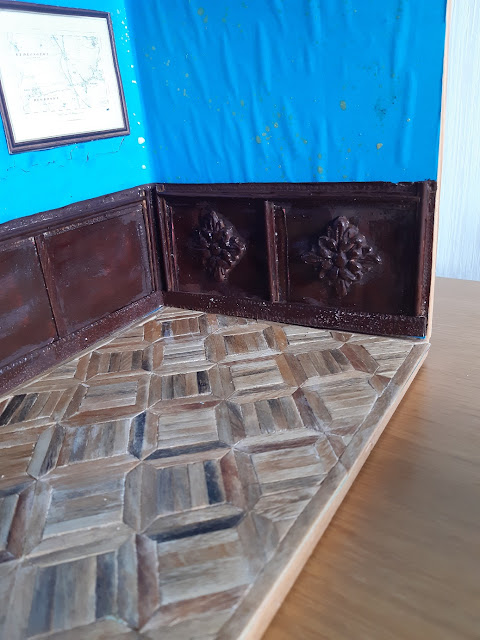 I did not put the ornaments on every panel because they would interfere with the furniture.

I wanted to add a fireplace that wasn't in the original room but of course would be indispensible in an academic's room without other heating. I happened to have a suitable fireplace surround so I didn't make one from scratch, but I will add some details to it, including a fire. A mantlepiece is a good place to put all the numerous weird objects I had in the original room. I will probably replace the mirror with a more period-correct one. 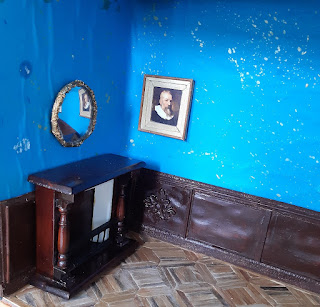 Coving in the old room was made from full-size picture frames, which at that time felt a perfect solution, but wouldn't do now. Again, I have quite a lot of leftovers from Womble Hall, and since then I have learned to use mitre shears. although even with this tool, mitring cornishes is a nightmare. I considered painting coving dark as well, but decided against it, to have something white in the room for contrast. 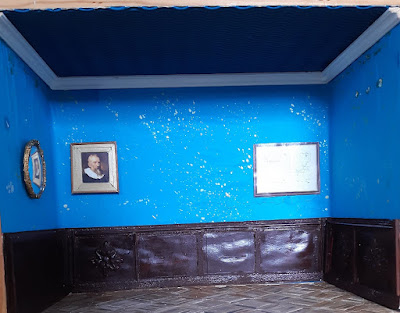 As you see, I have discarded the pipes. I have tried and tested, and they just didn't go with the panels. Since I am not even sure why they were there in the first place, I don't feel bad about them.

Before I could focus on furnishing, I needed to consider anbaric light (which, if you haven't read His Dark Materials, is what they call electricity in Lord Asriel's world). I have learned a lot about lighting in the past years, and although I still haven't found a perfect solution for Womble Hall, I have successfully made lights for some room boxes, including Dark Academia. Lights do add to the atmosphere. That said, the recipient of this room box is a lighting expert so it has to be perfect or none at all.

What this expert taught me is the fundamental principle of display lighting is that the light sources have to be hidden. There are many ways of doing this, but I have added a top frame to hide anbaric lights behind. At this stage, I also painted all edges dark brown, to match the panels. 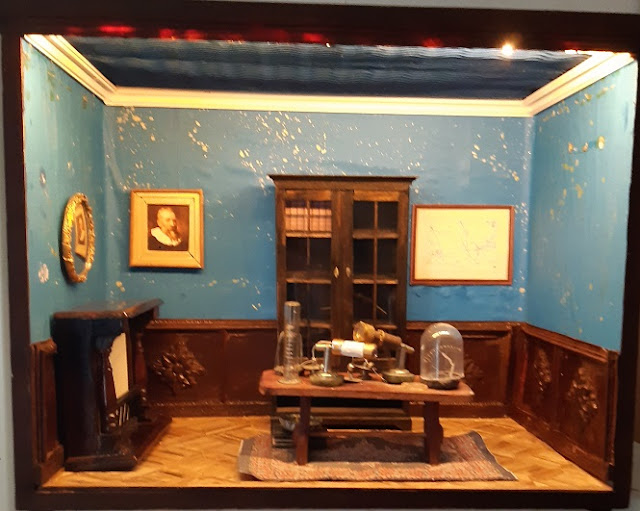 It does make a difference, doesn't it? I still need to make some improvements, but wanted to test.

Now to the details. The bookcase needs to be filled with books. There were a few books in the old room, all of them with a special significance, but I need more, and of course since then I have made hundreds of books - that's not a hyperbole, really hundreds, for Womble Hall, for the library room box, and more still.

I have some lovely books that would fit into an academic's room. They are real books, with words and pictures. Unfortunately they are a couple millimetres larger than the shelves so they will have to  be scattered around the room. 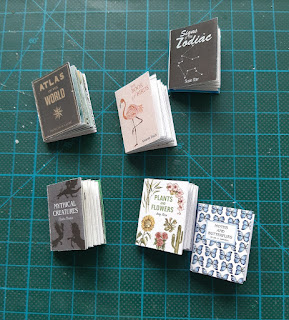 Most books will be fake, with just covers. I estimated I would need about 60 books, and I was right: 65. It kept me busy for a while, but I didn't want to cheat with just spines. There are indeed 65 individual books that can be taken out, and at least one row is books with recognisable covers. They are all there for a reason. Others are simply generic "old books", but I used different covers and made some books larger and thicker, for variety. It does not look natural when all books are of the same size. 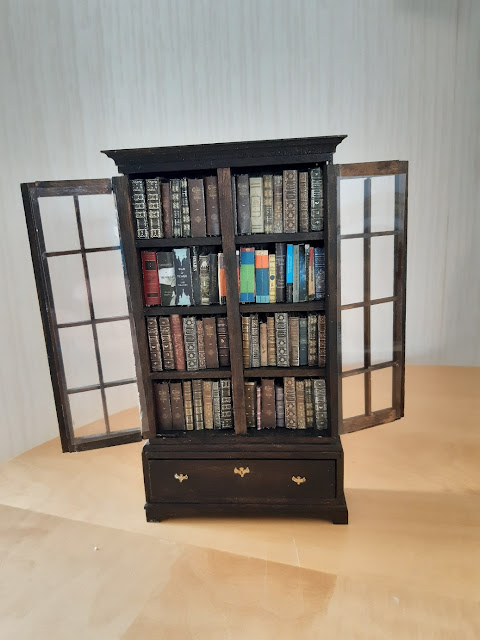 Inside the room, the book case looks truly authentic. The recipient may never bother to open the bookcase and look at the books, but it doesn't matter. 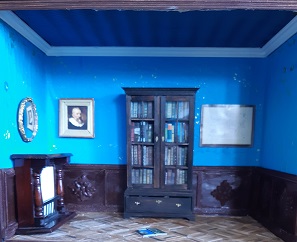 Of course I also have a copy of His Dark Materials. And a copy of one of my own books - I always leave a secret signature in my projects, like Hitchcock always has a vignette of himself in all his films.

In the drawer of the bookcase I have put old maps, letters, newspapers, notebooks and other private and confidential stuff.

I have already mentioned the fireplace, and it needed some extra work. To begin with, the back can never be mahogany, can it? It needs to be brick or just black. 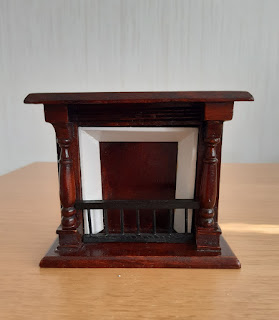 It is also too shiny as compared to the panellling, but I will have to live with it. I painted the back, and I had to sacrifice the fireguard because the kind of fire I wanted to insert didn't fit behind it. But I needed a fireguard, and I made one by painting a piece of fence from a farm play set. I made the fire with a flickering tea light, the way I have always made fires. This one can be put on a timer so it will switch on automatically in the evening, but in my experience it exhausts the battery quickly. But it is easy to take out, switch on and put back. There is of course a more sophisticated way to do it: drill a hole in the side wall and the fire surround and use a battery light that can be switched on from outside, but it will be, or might be, a next step. 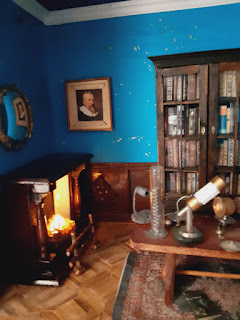 The wallpaper was damaged in some places, which happens when you are stupid and attach things to wall with blue tack. These spots had to be disguised, and on one wall I put a large old map of Svalbard. If you have read His Dark Materials, you know why, and if not, it plays a significant role in the books. Lord Asriel would definitely have a map of Svalbard in his study. 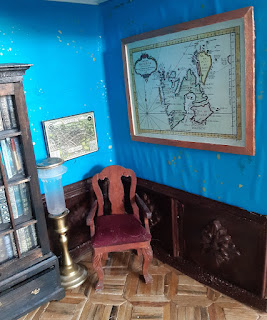 There was another map in the original room which I had cut from a magazine so it had no relevance at all. I replaced it with an old map of Oxford. I am afraid there is no Jordan college in this map.

On the left-hand wall, I put some framed portraits. I don't know who these people are, but let's pretend they are famous Arctic explorers.

The rest was more or less straightforward. I put the golden compass on a more appropriate side table. I added another occasional table by the armchair, on which I put a decanter of Tokay and two glasses. I kept Asriel's equipment for experiental theology - which is what science is called in his world.

I put two very pretty candlesticks on the mantlepiece. I made them in my miniature club, and I think they fit fine. I also added a mantle clock.

At a glance, the room probably looks the same, which has been the intention. But almost every feature has been improved, and I am very happy with the outcome. 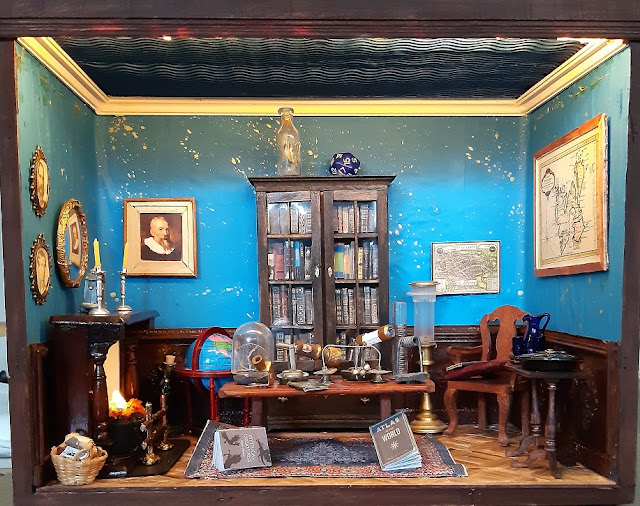 Posted by Maria Nikolajeva at 19:08